Hand Over of Trainee Enginemen 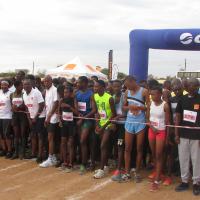 Botswana Railways Human Capital Department through their Training Section recently handed over 23 Trainee Enginemen graduates to the Operations section of the organisation. Among the 23 graduates, 8 of them are female who are the first batch to be recruited in the 30-year-old history of Botswana Railways.

When meeting the CEO and the Executive Management, the graduates expressed gratitude for the training and opportunity afforded to them by the organization. The Chief Executive Officer, Mr. Leonard Musa Makwinja indicated that he is lucky to have joined the organization at this time, to see through the very first female enginemen among the graduates in a male dominated industry.

He encouraged them to make the best out of what they have learnt and also better their qualifications by going for further studies. Furthermore, he stated that he is confident that they will take up the reins and eventually assume the future management positions of the organization.

Mr Mthulisi Lotshe, Operations Manager welcomed the graduates into the operations department and expressed his happiness that his department is growing. He said that he sees the graduates as the future of the organization and they should exercise maturity, accountability, teamwork and work harmoniously with other staff members.

“It is a demanding job which requires the right attitude, dedication and selflessness. You should be safety conscious and always be alert because you will be dealing with valuables assets. I can assure you that we will make you feel welcome and respected”, he said. Mr Lotshe thanked them and wished them well in their new career path and future endeavors.

Their trainer, Mr. Matthews Dikgang said that they should spread their wings and reach greater heights in helping the organisation grow and become a better place to work than it is now. Most importantly they should put their customers first, both internal and external stakeholders and serve them diligently and patiently.

The apprentice enginemen are already deployed and have since assumed duty in their respective stations. A formal graduation ceremony will ensue in a date to be determined where certificates will be awarded.

July 31st to August 4th, 2017, Botswana Railways Chief Executive Officer Mr. Leonard M. Makwinja accompanied by his Executive team went on a tour of the stations from Lobatse to Tshesebe in an effort to familiarize himself with the organisation facilities as well as host meetings in each of the stations.

The CEO, has been in office since July 4th, but had to travel to America for the inspection on the progress of the newly purchased locomotives. Not surprisingly upon his return he cherry-picked to embark on this tour which allowed a platform for him to interact with his staff from everywhere along the track as well get a view of all Botswana Railways’ infrastructure. The tour commenced in Lobatse, where he first got a chance to go around the station, see the offices both old and new, visit staff residents as well as take a trip to the Lobatse washing bay. The tour then proceeded to Mahalapye and Francistown where he also met, addressed staff and got a view of BR asserts.

In his meeting with staff, the Chief Executive Officer, Mr. Makwinja introduced himself, shared his work experience as well as academic credentials. He also laid down his roadmap and expressly stated that he would need the contribution of each and every staff member to diligently execute his mandate. Members of staff also had an opportunity to share their experiences and any other relevant information with the CEO.