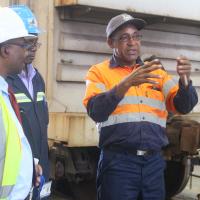 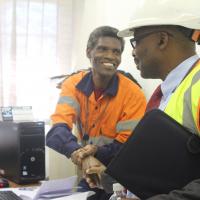 On the 18th April, 2017 Botswana Railways Acting CEO paid a surprise visit to the Workshops in Mahalapye.

In an effort to interact informaly with his members of staff in their environment of work to show appreciation and acknowledge their working conditions, the Botswana Railways Acting Chief Executive Officer (CEO) Mr. Stephen Makuke accompanied by the Corporate Communications Manager Mrs. Julia Thekiso paid a visit to the workshops for a meet and greet.

The visit was commended by those staff members who interacted with the CEO and shared that it brought optimism. Mr. Makuke visited every office from the Electrical, Signals through the Engineering department up to the Workshops themselves. In each of his meet the CEO informed his staff that his visit was merely to see how they were doing, how they have been keeping up and most importantly find out at least one thing that each section felt if provided with, will turnaround their productivity in a positive direction.

The Electrical section represented by Mr. Ramothwa expressed that they were in dire need of at least one extra person for the better running of their section whereas the Signals department pledged with the CEO to expand their fleet with 2 more cars.

The Mechanical Manager Mr. Mmipi shared the challenges that they are currently facing with regards to locomotives and suggested we take the route of remanufacturing of Locomotives, which he noted brings about more positive results. He further expressed his elation and anticipation of the arrival of the 8 locomotives procured by the organization and expected to arrive in October 2017. “With the arrival of the new locomotives we are expecting business to move effortlessly as we will have less delays, less breakdowns and less repairing” he said.

Though it was a surprise to them, most members of staff expressed their gratitude in having the honor of the CEO visiting the workshop. “It made us feel important and very happy that the CEO, can just visit us and for a change not in a meeting” said one of the staff members.

Some mentioned that the visit was unexpected as they wished he could have spared them a bit more time so they could express their recommendations, observations and grievances.