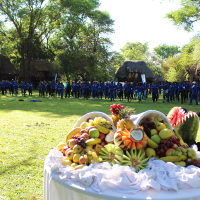 Plenty a time when we talk of wellness we think, exercise, fitness and eating right, we forget that there is more to a human being than just the physical there is also the emotional being that needs to be nurtured and cared for as much if not better than the physical being. This year has been a sad year for Botswana Railways after we lost a number of our colleagues due to illnesses’, and some taking their own lives which came as a concern to the Management of the organization.  Something happening once or twice may be coincidence but 3 times becomes a pattern and as such the Welfare Section heeded to the silent cries of our staff and intervened to try and figure out what could be the problem and how it can best be solved.

In an effort to combat that, on the week of October 21st to 25th, Botswana Railways for the first time held a wellness week under the theme ‘INVESTING IN LONG TERM HEALTH AND WELLNES FOR OUR EMPLOYEES’. The week which commenced in Mahalapye on the 22nd saw the Chief Executive Officer of the organization launching the wellness week to staff. He emphasized an unquestionable concern for his staff and their wellbeing. Mr. Makwinja noted that he felt the need to have such a week where staff had a professional to come and talk to them about the importance of taking care of one’s mind, body and soul.

He further clarified that Management and himself have agreed to put time and resources aside just to recognise, acknowledge and pamper staff. “We recognise that behind this successful blue, black and white Brand is you our people and employees.” said Mr. Makwinja.

Also, present to talk to the staff throughout the week was the Nature Care Health and Wellness Centre Motivational Speaker Miss Sally Pilar who emphasized the importance of seeking emotional help.

“Our approach of the world is mostly influenced by how we grew up, the things we have seen and went through and as such it is important to heal”, said Miss Pillar. She noted that it is important for one to seek help when they feel helpless in order to lessen the burden they feel in their hearts. She continued to add that everybody goes through emotional and financial problems, it is how we tackle these problems that determines our future. The Chief Executive Officer and his team travelled from Mahalapye to Gaborone on the 22nd, Lobatse on the 23rd where the health and Wellness day (South) was held at the Lobatse Stadium targeting staff members from Mahalapye, Pallaroad, Artesia, Pilane, Gaborone, Otse and Lobatse.

On the 26th October, the day was commemorated in Francistown at Cresta Marang Hotel targeting members of staff from the town and its surrounding Stations.  At both events, we had the honour of the Town Major’s Office being represented who also reiterated the importance of taking care of one’s mind, body and soul. Activities of the days included games such as athletics, tug of war, and sack race. Also present were hospitals from both towns which assisted with Body Mass Index, Blood Pressure. Tebelopele was present to assist with HIV Testing, Counselling and Education. Our counterparts from the banking fraternity were also present to Educate staff about Insurance