BR Applauded For Its Spirit Of Unity 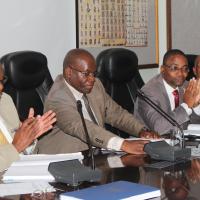 A great author J.K Rowling wrote “we are only as strong as we are united, as weak as we are divided”, a notion we at Botswana Railways strongly standby for we believe nothing is achieavable without teamwork. The Acting Botswana Railways CEO on May 26th, 2017 upheld to his motive of taking the organization to the people by visiting the Hon C.T Cebani, Mahalapye Sub District Council Chairperson.

“As Botswana Railways, we requested for this meet and greet with the Council Chairperson in an effort to get to know one another, to strengthen the partnership between Botswana Railways and the Council and most importantly to continue the relationship that has always been there between BR and the Village Leadership”, said Mr. Makuke. “Let’s start working together to uplift the government’s mandates”, he added.

He continued to divulge on the multiple services that Botswana Railways has to offer being the passenger train which he urged the leader to talk about at community addresses like Kgotla meetings. Mr. Makuke also highlighted on the convinience of Bluemark Parcel delivery service, on its affordability and reliability.

The CEO also noted how the organization continues to play a vital role in the development of the village and sited an example of the rehabilitation of the Mahalapye Show Ground houses as well as the uplifting of the grounds kraals, a project which we are currently undertaking in preparation of this year’s Agricultural Show which shall be held in July.

He continued to add that it is important that as leaders of the nation in different capacities they should know one another and be united. “we are thankful for what Botswana Railways is doing, for they have chosen unity over isolation, you are setting an example of how far we could go if we depended on one another as departments within the village” alluded Kgosi Segotsi.