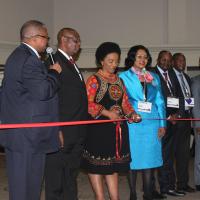 The 7th SARA conference was held in Johannesburg from 24th - 25th May, 2017. The conference which was held under the theme “INNOVATION IN RAILWAYS, ROAD AND PORTS FOR REGIONAL SOCIO-ECONOMIC GROWTH” brought together stakeholders in the transport industry including their suppliers.

The conference was preceded by Transnet Engineering (TE) workshop technical tour on the 23rd May whereat delegates were shown some of TE’s products which included boogies and other components used in the manufacturing of wagons and coaches. The highlight of the tour was TAL2001 presentation to the delegates. TAL 2001 is a TE manufactured locomotive which TE Chief Officer, Mr. Thamsanqa Jiyane philosophically said is the first step towards liberating the Region from Technological colonisation as the locomotive is manufactured by Africans for Africa. Mr. Jiyane also presented BR standard coach which he shared was one of their innovations and thus instilled in them a sense of pride.

Botswana Railways this time around was not among the many exhibitors who filled the exhibition hall but sent delegates who participated in panel discussions. Mr. Letlhogonolo Bantsi who was a panelist talked about Talent Management in Railways, discussing how it contributes to socio-economic growth. Some of the discussions were about the demographic changes of ageing workforces and difficulties in attracting new industry entrants which lead to serious shortages of skilled employees in the transport sector. The discussion entailed the need to consider the career aspirations of talented professionals so that organisational strategies can be developed to keep rail professionals engaged in their careers and specialised knowledge and skills retained by the industry.

Mr Kealeboga Disho of BR Properties took part in the topic, Landuse Planning in Railways and it emerged other Railways could learn a lot from Botswana Railways as suggested by the questions that arose.