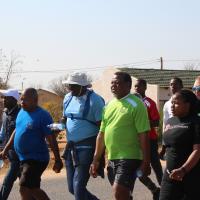 The financial state of most of the Government schools have somehow come to sound like a sad Shakespeare poem, we can recite most parts that resonates with us, some parts we’ll all together like to forget about. Over the years the Botswana Railways (BR) has received numerous letters from different schools with a cry for financial assistance.

On September 02, 2017, BR heeded to the request of Madiba Senior Secondary School to have a sponsored walk in which the BR CEO, Mr. Leonard M. Makwinja was the Chief Walker. The objective of the walk was partly to raise funds for the school’s upcoming prize giving ceremony under the theme “Thriving for excellence through trying times” which the CEO noted was indeed right because at the moment the Government has so many demands to meet and that Government institutions ought to come with progressive measures to fill the gaps. He applauded initiatives such as this one and encouraged those in attendance to collectively play a role in assisting the Government.

This currently state of insufficient funds has forced schools to collaborate or form strategic alliances with the business community to help in raising funds.
As the CEO noted, “it is time that schools and parents join forces to improve the situation. Parents from an integral part of the education systems and it should not be the sole responsibility of the teachers. Thuto ga e felele mo sekolong fela, e tshwanetse gore e goroge e bo e tswelele le ko lwapeng”, noted Mr. Makwinja

The CEO further reassured the school management that as Botswana Railways they remain committed to supporting the education system and said he looks forward to strengthening the healthy relationship between BR and Madiba Senior. The CEO also expressed gratitude to his Executive team and Botswana Railways staff who braved the cold weather and went out to support this noble initiative. Botswana Railways also donated P10,000 to the school.