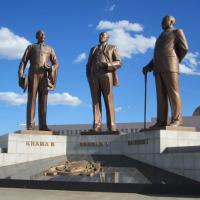 This month is that special one, where we look how far we have come as a nation. The best part is making personal assessments on where this country comes from. In this way, you might understand why things are the way they are today. I hope whatever you discover will be nothing but positives. Either way, the point is when you start to engage in exercises like these, you start being an active participant. You contribute in making Botswana great!

My own reflection has drawn me to two things this month. The first is that Batswana come from a history of farming. Our forefathers knew how to interpret signs, they knew from the shape of the moon in the new year whether it will be drought and diseases or a good harvest year. Their awareness made it possible to prepare well for the coming year. They knew when to relocate from meraka to masimo and from masimo to magae. Everything must have worked out well, as at one-point Botswana was known as the only country where the population of cattle was more than that of the people.

In this system of farming, there was an arrangement that our forefathers practiced. For instance, during a drought year, farmers in the drought struck area would search for good pastures in areas where there was no drought to relocate their livestock until the drought was over. To illustrate on how this worked, farmers at cattle posts around Radisele travelled as far as Shoshong seeking good pastures for their livestock. The visiting farmers would request farmers from around Shoshong to allow  their cattle to be relocated there until the drought was over. Sometimes the cattle-posts would be 150 km apart.

I need not mention that such distances were covered through walking! Think for a moment on how challenging that must have been! Do you not see how dedicated and persevering
our forefathers were? They really took precious care of their belongings.

What strikes me most is that our forefathers were each other’s brother’s keeper and their methods made it possible for farming to progress to a point where the population of cattle exceeded the population of people in the country.

The second point is the neatness of our forefathers. I noticed it most especially in the way they prepared themselves when it was time for milking cows. They thoroughly washed their hands before washing kgamelo, a container they used for milking.

Milking was done in the morning as follows; the farmer boils water to wash his kgamelo and used coal and ash from the fire as cleaning detergent. I kid you not, you would literally think that the kgamelo was new after it was washed. Thereafter, the farmer would wash his hands again and procced to his kraal. Usually, the cows will be waiting outside the kraal while the calves would be closed inside the kraal. The farmer lets one cow in the kraal and the calf will feed for about a minute, then the farmer takes the rope, known as mokao and tie it around the cow’s rear legs. I enjoyed this process when the cow was wild, the cow usually put up a fight. I enjoyed the skill displayed by the farmer in taming his cow, it is impressive to watch skilled farmers at work. After the cow is tied its rear legs, then the farmer squats under the cow by its udder with kgamelo in between his knees to milk the cow. No stain gets on the milk as he milks and at the same time preventing the calf from trying to feed while he milks. The milk will be so white with no spec of stain.

This process is repeated for all cows that have enough milk to feed their calves and be milked for human consumption.

The two traits I have just mentioned can be deduced to cooperation and neatness of our forefathers. Neatness goes with the skill of doing something. Our forefathers knew how-to live in harmony with one another and the environment with which they lived in.

I still get fascinated by the thought of how our forefathers collected firewood. They did not exhaust the firewood in the area, they had a system of rotating around so that the structural integrity of the environment remained the same. This year as I reflect where we come from and where we are headed, I wish for us to consider adopting these two principles in going forward. It should not be that difficult since we already have these genes in us. To some extent we are living in harmony, this is certainly evident by how Batswana live in peace with  foreigners.

The same principles apply at the workplace. Think of the results we could achieve if we cooperated as individuals within the Organisation or as a nation. Focus on  the bigger picture, being development of the country and never let negative things derail you. People who say leaders should lead their companies in the same way they would in raising their very own children have a valid point.

As a parent, you disregard the little irritations and work at growing your kids to be acceptable people who will contribute to the development of society. Apply the same principle at the workplace and observe the  outcome  you are going to achieve. Just so we are all on the same page, we are all leaders in one way or the other. You may be a leader at your home,society or at work.

The other important trait is being neat, not only at our workshops and mines. These two seem to be taking the lead when it comes to neatness, I suppose it is to do with the accreditation bodies they are registered with which keeps them in check. But what if we were all neat from our homes, in our personal lives, what would that do to our lives and productivity?

Now imagine how much we can achieve if we exercised these two principles, working in cooperation and being neat. You will not feel the clutter on your mind, less stress means more opportunity to be more productive. Working in cooperation means you are each other’s brother’s keeper.

In celebrating this month, our month, I encourage you to increase your capabilities by practicing these two principles, spirit of cooperation and neatness and see how far it takes you.

Nothing great was ever accomplished without inspiration as observed Earl Nightingale. Therefore, motivate yourself, believe that you can be great, set your goal to improve your cooperation and be neat.
Happy month of  independence, happy working on your way to being great and making Botswana a great nation!