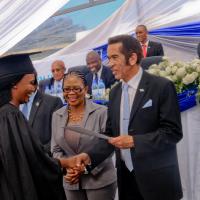 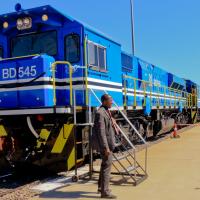 As mavens have said, “A journey of a thousand miles begins with a single step”. Botswana Railways proved this as it launched its new eight locomotives and celebrated its thirtieth Anniversary on December 14, 2017 in Gaborone.

The launch was officially a grand festival with the President of the Republic of Botswana Lieutenant General Dr. Seretse Khama Ian Khama delivering the keynote address and subsequently officially launched the 8 locomotives.

He said, “It is such a great feeling for all of us to share in the delight of Botswana Railways celebrating 30 years of existence since it started its formal operations in October 1987. The railway was first laid in our land back in 1987 and for a very long time during the colonial era and after the attainment of our independence, the administration and operation of the railway has been in foreign hands.”

His Excellency the President Lt.General Dr. Seretse Khama Ian Khama said that Botswana Railways was hit hard by the inadequacy of motive power over the past years. That is why in respect of that the company found it suitable to buy new locomotives to boost the company and for the business to flourish.

He said, “It is against this background that today, in its efforts to improve capacity, efficiency and to prepare for the future, Botswana Railways has injected eight new locomotives to its fleet of rolling stock to help remedy the challenge of reliability of its existing locomotives, which will in turn improve service delivery, “said President Khama.

Furthermore, His Excellency the President Lieutenant General Dr. Seretse Khama Ian Khama mentioned the introduction of Francistown- Bulawayo day train. He said, “Distinguished ladies and gentlemen, I am pleased to announce that as part of Botswana Railways’ strategy to expand its business streams, the Organization has taken a decision to expand the passenger train service beyond our border. With effect from 18th December 2017, BR Express will add to its service Francistown-Bulawayo route. We hope this arrangement will bring positive results and make travel between the two countries convenient.”

His Excellency the President was given the honour to award certificates to Botswana Railways Graduates.  Graduates were congratulated on their success and told to set their minds in making Botswana Railways a success for the good of the country as a whole.

He congratulated the graduates by saying, “Director of ceremonies, I am happy to announce that for the first time in 30 years of Botswana Railways history, the Organization will today be graduating 22 locomotive drivers, 8 of them being women. This is indeed commendable on the part of Botswana Railways as it comes at the wake of a decision taken by the Organization in 2015 to enlist women locomotive drivers.”

As a token of appreciation, the President received a beautiful piece of art which was awarded to him by Minister Mokaila on behalf of Botswana Railways.

Voicing out his appreciation to the President, the Minister of Transport and Communication, Honourable Onkokame Kitso Mokaila thanked the President for sacrificing his precious time to come and be part of the event. Honourable Mokaila said Botswana Railways has come a long way to be where it is today. “Therefore, on this gracious day, as the Ministry and on behalf of Botswana Railways we are thankful to be having the President within our midst as we celebrate this great milestone”, said Mokaila.

The day comprised of a series of performances to entertain attendees and inform people about Botswana Railways. These included among others a precious piece of poem by one of the Youth from Mahalapye, Mr Baakanyi Soko who gave a strong message praising Botswana Railways through his art of poetry.

Botswana Railways Board Chairman, Mr Adolf Hirschfield thanked His Excellency the President and the government for their unwavering support. He also expressed his gratitude to Botswana Railways board members and the executive committee members for the support and commitment that has helped Botswana railways replace its wagons through support of the government.

Hirschfield also thanked the Botswana Railways mother board, the Ministry of Transport and Communications for their immeasurable support in making the organization what it is today.

The President went for a test drive in one of the new Locomotives.