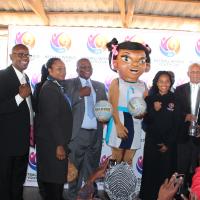 The Netball Youth World Cup trophy toured Botswana from June 21 to June 30 2017. The NYWC2017 popularised by the #ReABaTsaa hashtag saw the organizers engaging on a trophy tour accompanied by the games’ bubbly mascot dubbed ‘Naletsana’

Beginning in Gaborone, Mahalapye was privileged as the trophy made its first stop in the village on June 22. The stopover was not without excitement as it was met by ululations in a fanfare show at the Main Kgotla much to the delight of onlookers. This was an oppotunity for Mahalapye community to be a part of the games by interacting with the team and having a feel of the buildup vibe to the upcoming of games.

The trophy entourage was met by the village leadership including Kgosi Duncan Segotsi, Member of Parliament for Mahalapye West Hon. Joseph Molefe,the Deputy District Commissioner Mr. Bakuedi Masole among others and large scores of villagers who came to be part of a historic occasion.

Botswana Railways being the biggest body corporate in Mahalapye and also in appreciation of the fact that it does not operate in a vacuum accordingly it is part of the community within which it operates attended the occasion through representation from the Corporate Communications Office.

The Guest Speaker at the event, Secretary for Umbrella VDC Mahalapye, Mr. Mompati Ntapu pleaded with Batswana to extend their outmost support especially that this is the first ever netball youth world cup to be staged in Africa. He encouraged Batswana to buy tickets for the games and rally behind Team Botswana. He also noted that they are proud and honored for Mahalapye to be selected as the first stop of this national tour.

The Netball spectacle will be held in Gaborone, Botswana, the first time the International Netball Federation (INF) has held an international event of its magnitude on the African Continent. The Netball World Youth Cup is the pinnacle of netball competition for emerging players who are under 21 years of age and the INF has held an U21 international competition every four years since 1988.
The inaugural Netball World Youth Cup games will be on July 8, with twenty countries competing from all of the INF five regions, following qualifying rounds. Botswana is pitted in Group C of the tournament with the likes of Jamaica, Malaysia, Cook Islands and Uganda.

The Netball World Youth Cup being hosted in Botswana is set to open great opportunities for the country and will go down in history as a momentous occasion for the country.