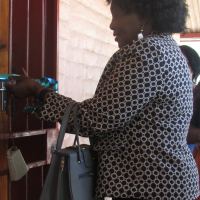 Imagine when Cecil John Rhodes decided ‘let there be a railway’ he never really thought the extent his dream would go, the lives he would touch, the impact it would have in many people across the continent in the end it meant so much more than I assume expected. One man’s simple dream now synonymous with prominence.

On the 25th August 2017, Botswana Railways got an exclusive invitation to be a part of the Supa Ngwao Museum Relaunch in Francistown. On a windy Friday morning in Francistown, we get to see the Supa Ngwao Museum, situated amongst the many old buildings just a few meters from the BR Francistown offices sits a rustic building turned into a museum. From its first glance, one can tell that a lot has been left untouched for a long time. There is no denying that since its inception Botswana Railways has played a pivotal role in the development of Botswana. Besides being a bulk carrier of goods, the railway line has spurred development along its path from the South to the Eastern part of the country, facilitating mining activities and catalysing the growth of urban areas and commercial and trading activities.

The role of the railway as an economic enabler is demonstrated by the developments lining along the eastern side of Botswana where the railway line is located. It is against this background that Supa Ngwao Museum saw it fit to extend an invitation to the organisation because of the its role in both the socio and economic development of Botswana. After some years of ailing, Supa Ngwao Museum Management saw the need to resurrect the once respectable, history rich museum to what it used to be which hence the need to re-launch the it. The Museum has also formed a new Board of Trustees.

In his welcome remarks, the Supa Ngwao Board Chairman Mr. David Sechombo informed the audience that this special occasion coincides with the 120th Anniversary of Francistown as a town. He further expressed that, their wish is to see this humble museum grow from strength to strength and pleaded with the community of North East District and beyond to play an active role in pushing this agenda. “This is your museum, it does not belong to the Board of Trustees, it is for the community at large” concluded Mr. Sechombo.

Her Worship, the Mayor of Francistown Ms. Slyvia Muzila who also graced the event said for the past 120 years, Francistown has had Supa Ngwao as the only Museum and said it has survived thus far because of individuals who make daily sacrifice to keep the museum going. “Let me appreciate those who have made efforts to resuscitate the museum and that a Board has been set up and hopefully it would take the museum a long way commensurate with the growth of the city” said Muzila.